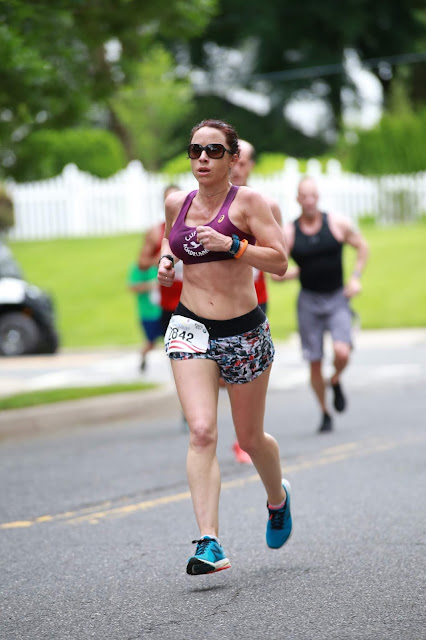 Looking back over my logs from my best racing of my life, I ran this race at 7:10 pace before training on to eventually PR in everything I ran later in the Fall of 2016.

I don’t need to best my PRs right now to feel like I have a chance at new PRs when racing and weather gets good months from now.  I just want to be close to the same place I was in the last time I took this journey.  I am comparing my past training volume and paces, nutrition, body composition and race performances along the way to determine whether or not I am on track to race well come Sept, Oct, Nov, Dec. Myself from 2016 is my pace bunny.

Being realistic, I aimed for 7:20 pace for this race because the last time I ran Run for the Red I was about 20 minutes faster. It didn’t feel smart to expect to be faster than 2016 myself at this race only one week later. So using my past performance as my guide I set a realistic goal. I hoped if I ran smart I would beat that goal.

At Run for the Red, I ran with wild abandon, knowing I was too fast too soon but ready, willing, and able to take my beating when it came. It hit hard around 21M.  My ego was bruised. My hamstring too.

This 10k was a Masters Women’s USATF-NJ State Championship Team Race so I wanted to be a part of my team. We have some fast masters women and it feels good to be pulled along by some amazing people.  They make me want to do better.

Unlike Run for the Red, which was a Check-In Race where mistakes were encouraged, this was a race that I planned to practice some skills. Success was not measured by my finish time. I was measured by my execution of the pace plan. I wanted to practice negative splitting and self-restraint. There is no value in blowing up at every race. It is tremendously harder (from a discipline stand-point) to start slow than it is to start too fast, but it is better in the long run. There is value is practicing how to feel the sensation of running "as fast as possible while retaining one more gear" (or two) for the last 1/4 of the race.

Today the weather was a gift. We had the best weather I have ever experienced at the Ridgewood Run. There would be a lot of PRs today!  Not for me, but for those who were ready for one. I line up towards the front of the race, a few rows back, more rows back than I would if I was fit and fast.

The starting gun is sounded and we are off.

I am careful to not get swept away with the crowd. 7:20 +/- 10 second from M1 is my goal.   There is no excuse to not nail this. I have a computer on my wrist that tells me exactly what I am doing. There is no need to be any faster than that target pace. I would love a 7:10. After Mile 1, I can forget the watch and feel for that sweet spot that is just fast enough but no so fast that I can’t get faster. When racing smart, I always want to know I have more speed in my legs for the end. M1- 7:09 (perfect!)

Mile 2 has a little descent so I find my flow and start concentrating on my body, my legs, my breathing, and my effort. I want to appear to be working less hard than those around me not harder. I focus on myself, but notice how hard others around me seem to be working too. I try to gather information internallly and externally.

I have no intention to race anyone in M2. I am ignoring the watch because I know my best running happens by listening to my body, not by watching the clock. I am in a comfortable place, in my own head, cruising along, knowing I can work harder later. I am not sandbagging, but rather riding what feels like just a few seconds slower than my red-line effort. My breathing is controlled and I am trying to run as smoothly as I can. M2- 6:50

I don’t look at my splits until the end of the race until after I finish.  I can tell if I am running faster along the way just by how hard I am working.  I think about the mile I am in and assess if I am feeling like I am running smart.  Today the answer is "Yes. Yes I am.”

I start to notice people around me fading. I am starting to pass many who flew past me in M1 and M2. I am working hard. I am careful to not work so hard that can’t shift gears.  I adjust my pace as needed to stay in that sweet spot. I am ok with slowing a little to retain my gears. I remind myself that my best race will be determined by what I do in M5 and M6 not what happened in M3 and M4.

I am hitting a flow state. Oh, how I miss this feeling. I can "hear" music start to play in my head. I am lost in the song. I am overtaking more runners than those who are passing me. I am moving in slow motion and everything else is a blur. Nothing else matters. I am working exactly as hard as I am capable of sustaining. Running feels like work. It is not easy. But nothing hurts. I am not worried that I can’t hold on. I know I can. M4 - 7:03.

I learned a while ago when racing a 24 hour race to think about the lap I am in by saying “Working lap [and naming the number]” rather than naming the lap I just started which then confuses me as I wondering if I had just completed that number.  I still do that now when I race. It keeps my mind on the mile I am in.  I think to myself “Working M5. Get ready to move at the M5 Mark.”

In this mile, I allow myself to shift my focus from internal, task-focused pacing to external, ego- (or competition-) focused racing. This is when start to open the gates that I have put up to hold back my ego-focused side while I focused on my task.

[Ego is not a bad word. Ego-focused just means Outcome focused. It is that part of you that is preoccupied with the overall results like finish time or placement. Task-focused is the part of you that is focused on smaller bite-sized tasks a long the way].

My task was to run hard but not too hard and to make sure no matter what I did, I had another gear.  The ego is the part that cares more about beating competitors and doesn’t care about the task. I race best when I am task-focused for 3/4 of the race and 1/4 of the race I let my ego pull me to the finish. It is a race, after all, and the point of racing is to try to beat competition. That is all ego-focused stuff.  If I let my ego-focused side take over from the gun, I can expect a crash and burn beginning to happen by the half way point. Discipline for me is to hold back my ego-focused runner-self until I know that once I let her loose she can do nothing to destroy my result, but only make it better. There wont be enough time for crash and burn if I wait long enough to shift gears. M5: 6:57

I am side-by-side with Karl. Karl has been part of my “pack” for a while. We both get faster and slower and sometimes don’t run together but over the years Karl and I have raced many miles side-by-side.  Runners who race a lot know who their pack is. Sometimes they are collaborators and work together. Sometimes they are "freinemies."  In racing, you get to work with your pack, but by the end it turns into a race and you are happy for whoever wins the day. You push each other to better times than you can alone in those last final miles when the race is ON. It is never certain who will take the lead over the finish line.

Karl and I greet each other in M5. I say something about how it is time to do work. M6 is a fast mile.  Karl asks “Where’s Ben?”  [I love this]. First I say (not getting it at first), “Well, he is on the side-line cheering and I think he is racing the 5k…(then I get it)... but right now, Ben is right there (and I point to the ground a few steps ahead of us)… Ben is one step ahead pulling the pace home.”

Karl, Ben, and I were a pack. The three of us ran many races side-by-side just like Karl and I are today.  But Ben was injured when he was hit by a car while he was riding his bike and literally broke his back. His comeback has been miraculous. But he wasn’t racing the 10k today… in person.  But he was there with Karl and me.

Karl and I do not like to let Ben win ;) so we kick it up hard, as hard as I could at the time. We picked up Laura, my teammate. Laura rises to the challenge and doesn’t miss a beat as Karl and I are flying. She joins us. Now we are three and we are hauling.  M6 - 6:33

My breathing is crazy. My body is working harder than it has worked in a long long time.  I am giving 110%. Karl pulls away. I can’t match him but I give everything I have to give.

Laura is on my side. We are not giving up. We are in a race. There is no "let's finish together holding hands" :) or letting the other one have the win out of friendship. No. This is a race and we are racing. We will be friends after. ;)  It doesn’t matter who wins because we are on the same team. We push each other to a 6:06 paced last .2M and it feels amazing! I finish a half step ahead but Laura started behind me so she gets the win today! 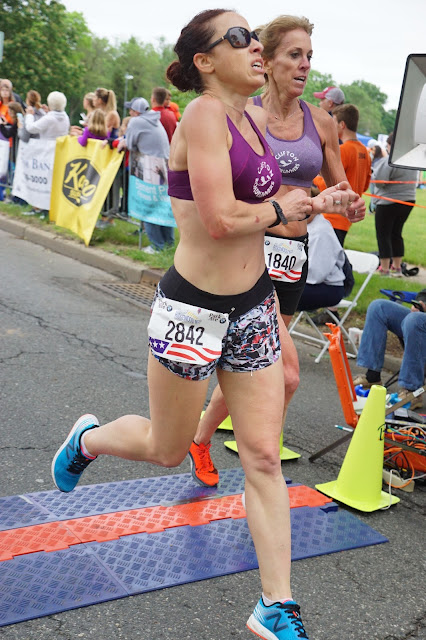 Laura turns to me and says (as I am hunched over dry heaving) that she just set a new 10k PR!

Karl is my pack. Ben too. And now Laura.

My final mile was the fastest mile I have run in half a year.  I followed my plan completely and beat my goal by over 15 seconds per mile. I am now ahead of my “pace bunny” <3

What a fantastic day!
Posted by Shannon at 7:30 PM