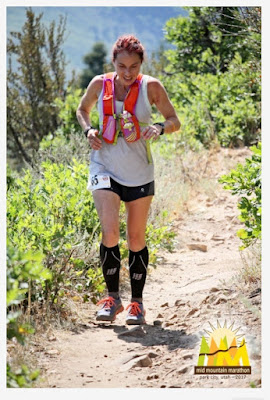 A few months ago, I felt compelled to see some mountain tops. Last June, SuperDave and I ran 51M up to a summit in Bryce Canyon, just in time to see the sunset. This was one of the best experiences I had in a long time. I needed to see the sunrise over a mountain again.

This year, Sid and I decided to visit Park City. While there, I ran the Mid-Mountain Marathon, a trail marathon that takes place at about 8500ft for most of the race. Being from 20ft, I knew the altitude would limit me. Considering that I feel very much out of "racing shape", I planned to hike when I needed to and run when I could. My biggest concern was whether or not I would be able to beat the cut-off at 16M. We had to maintain a 15:00 pace and I truly wasn’t sure if I would be able to do that. It really depended upon how technical the trail was.  Altitude can be soul crushing to those who reside at sea level.

I booked a hotel in a very nice lodge so Sid would have a comfortable place to stay while I ran. I felt like we needed a splurge weekend, so this trip was truly a vacation in a beautiful place with a marathon thrown in, just so I could get a workout. The lodge did not disappoint us at all.

The first thing we did after landing in SLC was to drive up to Guardsman’s Pass. This is the start of the Big Cottonwood Marathon, one of my very favorite races. We went on a short hike and just enjoyed the views while trying to breathe at 9700 ft. 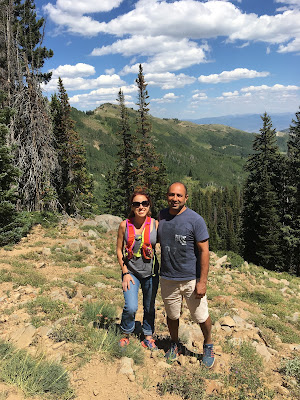 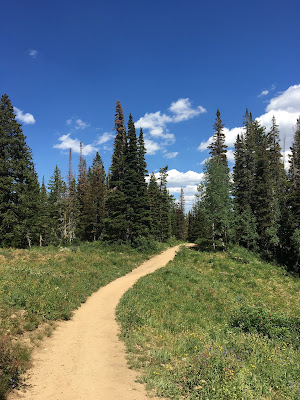 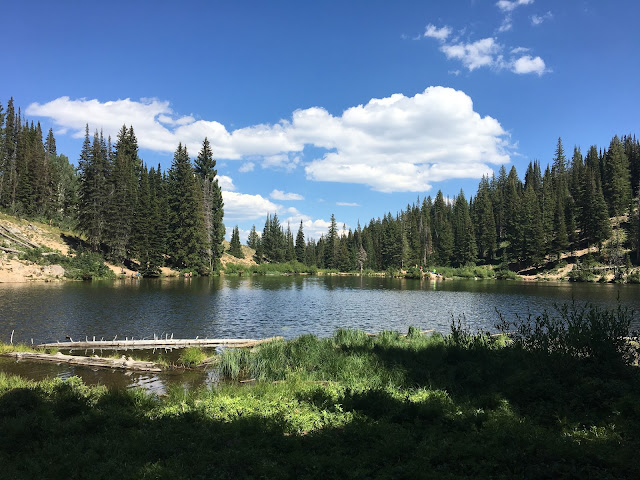 The next morning I would try to run at 8500 ft. As I huffed and puffed while walking back to the car, I began to question what I had managed to get myself into. Hey, worst case scenario is that I DNF. That is not really a big deal to me. I know most people feel a DNF is some type of epic personal failure. I just don’t feel that way. Running is something I do for me, for fun, to bring me joy, and right now if I feel that I something is going so terribly wrong that I want to or need to stop I will stop. Sure it is disappointing, but I don't beat myself up for doing it. I have nothing to prove. 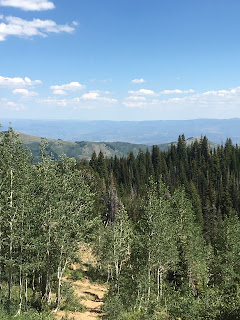 No matter what happened, I knew I would still get to see the sunrise over the mountains while traveling as far as I could on foot. There will be a day that I can no longer run trails for any duration at 8500ft. Today would not be that day.

I did not do much planning (or specific training). It was on the way to packet pickup that I realized I was supposed to take a bus to the start. When I learned where the start was, I was so happy to discover that it was actually .2M from my hotel!  POINT TWO MILES… No way!  That is so perfect!

With the 2 hour time change, getting up for the race was easy. My 5:00 AM alarm for a 7 AM race start felt like I was sleeping in. I didn’t even organize my gear until the morning. I wasn’t sure how my shoes would feel since I was wearing new wear-test Hokas. I needed to put 25 miles per week on them so this would knock out a week’s mileage in one day! I was hopeful they would be ok. They were. 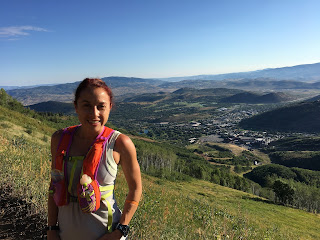 At sunrise, Sid and I walked over to the start. I was nervous. It felt like forever since I raced a trail race at altitude. I had no idea what the footing would be like. Setting realistic expectations, I seeded myself way in the back.

The weather conditions were perfect! It was high 40’s at the start and the temp would rise into the 80s by the end.  However, with no humidity and a shady course, it just felt cool and comfortable the entire way.

Off we went and by the end of mile 1, I felt like I was already in trouble. The altitude was just too much for me. I learned from last year at Big Cottonwood, that when I don’t get in enough air, my lower legs cramp and spasm.  It was happening again, as we worked our way from about 7600 ft to 8500 ft.

By the time I hit the 3M mark, I was run/hiking at a blistering 14:50 pace. I had stopped for a few photos, but I also needed that time to catch my breath. I was certain I was not going to make the cut-off.  I am pretty sure most of the entire field has passed me. Trains of runners on the single track “On Your Left’d” me for the first 45 minutes of this race. 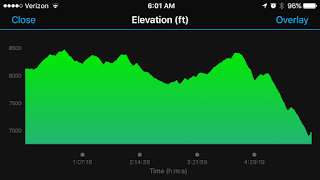 By 3.6M into the run, everything started to turn around! The shin spasms alleviated, the course started to feel better to me. There was runnable trail for a long time and I just ran ran ran… slowly... but it was definitely running ;)

From this point on, I must have passed about 100 runners. I wasn’t fast, but everything I could run I did and only one person passed me from the 3.6M mark through the finish (just one guy who was hauling at the very end). I had stumbled over rocks about 5 times and was so proud to have been able to right myself before falling. People around me were not so lucky.  Most falls happen when glancing away from the trail. When checking the watch, looking at the beautiful views, or looking up ahead to try to avoid mountain bikers coming the opposite way, all led to me kicking a rock that threw off my balance.

But it was not until the last few miles of the race that I had gotten so fatigued that lifting my feet became a chore. The course shifted from shaded woodsy trail to extremely runnable downhill switch backs.  Due to my slower pace for most of the race, I was not really burnt out too much by the end. As we hit the switchbacks I was able to pick up my pace, but not my feet, apparently! 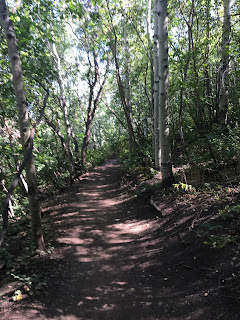 I fell 3.5 times between M21 and the M25. At one point I was getting annoyed with myself for all the stumbling. (.5 was because I landed against a tree, so technically I was still upright. But that tree kicked my butt!) Even with my unique technique of flinging myself down the switchbacks, I was still passing people. 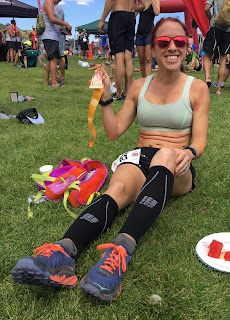 This marathon turned out to be one of slowest marathons in my life, but it was one of the most enjoyable. I love the area. Park City is fun.

The downtown main street area is filled with delicious food at interesting restaurants. The mountain views are inspiring. I was just so glad to be there doing something that scared me, in a good way.

I need more Adventure in my life and the Mid-Mountain Marathon certainly fed my soul. As I approached the finish line, I started to feel myself getting emotional. I was so uncertain about whether or not I could finish a trail marathon that was over 8000 ft elevation. A lot could have gone wrong. Very few things actually did. I set out at a slow pace, which helped make the work more fun.  By the end, I still felt energized. I was able to finish the second half stronger than the first. I was only bleeding a little at the end. It was a good day!

My time was 5:39.  Sidney seemed proud of me. He was quick to point out that I was 14th in my age group, which made me laugh a bit.  But he followed this up with “Look at the entire leader board!!! … Almost every single person ahead of you is from the mountains. You are one of the first from sea level to finish!”

Ok, that made me feel proud of myself.

Sid and I spent the next few days hiking trails, eating and drinking downtown, and relaxing at the lodge. It was one of the best trips I have had in a long long time. We didn’t feel rushed. Our accommodations were so beautiful that just hanging out at the lodge felt like we were doing something special. We spent time just sitting on our deck together watching the mountain be a mountain. 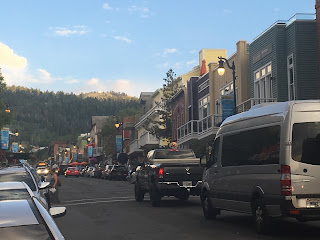 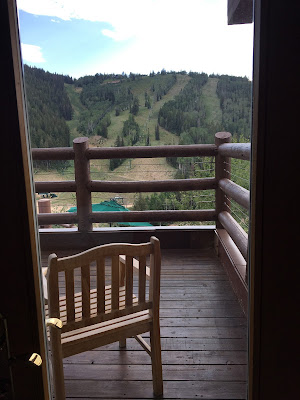 What a great trip!