Thank you to all of those who contributed to Sidney's Freedom Flights.  You saved some lives today.

It was gray and balmy morning. Sidney met Big Al at Lakewood Airport to head off to Erwin, NC to pick up two dogs in need of rescue.

The sky contained pockets of rain.  Just prior to leaving, Big Al gave Sidney a pop quiz about how much experience he has flying in the clouds.  (For the record clouds are bumpy! They may look soft and fluffy, but that is a complete and utter lie. And For the record, Sidney has plenty of experience flying in clouds).  Then Big Al asked Sidney to give him a quick lesson on how to land the plane in case Sidney passed out :) ... and they were off.

Big Al and Sidney left around 9:30 am from Lakewood, traveling for about 3 hours to Erwin North Carolina where they met Linsie, the "Foster Failure" by her own report, at the airport.

Linsie explained that if Sidney wants it bad enough he can become a "Foster Failure" too, which is when people agree to foster dogs but have so much trouble giving them up that they just end up keeping them.  She said it really wasn't a bad thing.

Linsie brought "Penny Marshall" and "Princess Buttercup" to the airport and shared their stories.

Penny Marshall's story is very similar to Enzo's.  She was found on the side of a highway in North Carolina.  She was dumped and abandoned.  Somehow she was found, captured, and ended up in Linsie's home as a foster.

Princess Buttercup was an owner surrender.  Her family wanted to move to Virginia. Apparently Virginia must have some new policy that the rest of the world is unaware of which bans people from bringing their pets with them when they move??? Ugh. (How can people be so cruel).

Owner surrenders are in a very bad position in kill shelters.  When a dog like Penny Marshall is found wandering the streets, there is a small chance that she is lost and her loving family is desperately trying to locate her, so the shelters give her some time, not much, to be found before euthanizing her.  While owner surrenders, like Princess Buttercup, are simply unwanted by their owners and therefore the shelter knows that no one is going to save them, so they get on the short list.  It is simply heart-breaking.

However, these two dogs were pulled from the list and fostered by Linsie.  They found safe havens in the north at See Spot Rescued and needed transport as soon as possible so that Linsie can pull two more dogs off the list and foster them as well.  People like Linsie are true heroes. Sidney agreed to do the transport.  Your contribution helped to make this possible.

After Sidney landed, Big Al was a huge help assisting with walking the dogs and making sure they were well-handled.  Sidney often has a lot of work to do to keep the flights safely on schedule including weather checks, filing his flight plan and getting the plane gets fueled.

These flights are never leisurely as dogs are waiting and the turn around is as quick as possible.  Soon the guys were back in the plane transporting the pups to freedom.

Three hours later they met Marie from See Spot Rescued who planned to take Penny Marshall and Princess Buttercup on the next leg of their journey, to their new temporary home in Jersey City to be adopted out.

If you would like to support what we do, please consider making a contribution to Sidney's Freedom Flight or share links to what we do.

You can find more information about Princess Buttercup and Penny Marshall here: 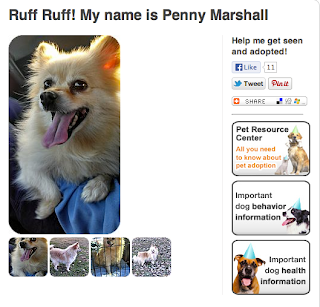