In 2009, somehow I discovered the La Luz trail run.  I have no idea how.  I likely wanted to visit my friend Jim in ABQ and must have stumbled across it on some website.


This year, Jim Plant joined us for the race and his wife Jess joined us for the weekend.  I also got to spend time with my friend Jim G, who I have known since college.  It is always good to see Jim! (Both of them).  Beside running up the mountain, we shared a bunch of meals and spent the day prior to the race driving up to a natural hot springs resort about an hour above Sante Fe called Ojo Caliente.

Ojo Caliente was the most relaxing place I have ever been to and I am not quite sure there is anything like it anywhere.  The resort is over 145 years old and the core attractions are several naturally fed hot mineral springs, Iron, Soda, Lithia, and Arsenic.  Yes, I jumped in a boiling tub of arsenic-laced water and lived to tell about it.  Relaxing music is pumped through the resort.  You are only allowed to Whisper.  Not only were their signs posted telling us so, there were also people walking around with handheld signs reminding us of this rule.  Hammocks and lounge chairs are placed strategically to help you appreciate the views of the cliffs the spa resides in.  Jim and his wife slathered themselves in mud and baked in the sun, which was fun to watch. Sid and I splurged on deep tissue massages. 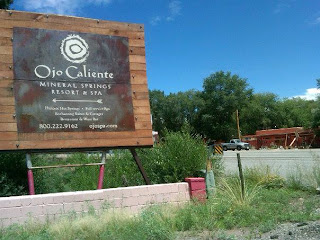 In addition, right from the front door of the spa are 12 miles of marked mountain bike and hiking trails (which we did not get to explore, this time).  Beside soaking in the pools, you can also make appointments for spa treatments.  (One sign, used to demarcate a closed mineral pool, but faded by the sun made me laugh because it looked like it said "SORRY  LOSER" and I thought "Well, that is not very peaceful of them!"... But what it really said "SORRY CLOSED."  A few minutes later I heard Jim point out to his wife the same sign. LOL.)  We spent several hours there and at the end of the day I realized I had just gone the longest time, with the exception of when I am asleep, without checking my cell or using my Ipad that I had gone in years and I did not even miss it.

The Race:
We decided to take two cars so we could leave one at the base of the Tram and drive one to the start.  After a few photos, we gathered our gear and got ready to walk over when I heard Sid and Jim discussing what to do with the car keys.  Sid and Jim both had small handheld bottles and not a lot of storage. I used my Nathan's Minimist hydration pack b/c I wanted to be able to carry money, and later throw our shirts in the back after the race.  In one of the funniest discussions ever, Sid noticed Jim thinking about where to put his keys and suggested he leave them in our car. Jim them pointed out that would be a bad idea because Jim needed them once we got to his car at the Tram to drive us back to our car.  But Jim then stated, that Sid should have left his keys in Jim's car at the Tram so he wouldn't need to carry them up the mountain... until Sid pointed out that he needed them to drive us from the Tram to the start. Sid then declared them both a bunch of dummies.  At that time, I took the keys and put them in my pack. We were clearly already suffering the effects of 6400 ft of low oxygen! That or lack of coffee. LOL.

As we walked uphill to the start, I took a puff of my inhaler, which stopped working.  I told Jim that we were so high that my inhaler had asthma.  This was not going to be pretty. :)

The race starts with an uphill, slightly rolling road section (1.8 mile) that makes someone not used to the altitude (me) require walk breaks.  I had told Jim that I usually need my first walk at about .2 miles. At point .11 into it he finally believed me and told Sid and me to go on without him!  I was very proud that Sid and I made it all the way to .3 miles up before our first walk. :)  The road is the worst!

Once at the trailhead, the elevation gain is more forgiving as the switchbacks make it more runnable, in theory.  But on race day, by the time we reach the trailhead, due to our slow flatlander pace, we find a lot of those who were able to race their way to the trail then decide to slow down and set a slower pace ahead of us. On the single track, there is no easy place to pass.

All weekend long I had a the song Gone, Gone, Gone, by Phillip Phillips stuck in my head. There are parts of this song the make me think about how I feel about Sidney.  It was a very sweet thing and as we started running, I could hear this playing in my head.  It was beautiful soundtrack that went well with the experience of me running with him up this gorgeous mountainside on this day which was very special to me.


Then at 2 miles in, Sidney started making his move and we began to pass people. At one point, as I shimmied past someone and extended my hand out to catch my balance... sticking it right into a huge cactus with unforgivingly huge needles.  They pierced my thumb, index finger and middle finger.  When I pulled out the needles, the blood wouldn't stop... and the lyrics to that beautiful song in my mind morphed into "Stuck my thumb. Now it won't stop bleeding. Stuck my thumb. Now it wont stop bleeding"... FOR MILES I heard that over and over. :) LOL!!!   Eventually it stopped... both the song and the bleeding.

After about 4.5 miles of dirt switchbacks, there is the one significant downhill section but it is a bit too rocky for me to comfortably take advantage of it without fear of propelling myself over the side of the mountain. So I walked.

Almost immediately after the decline there is a mile of loose rocks to navigate.  This happens to occur as we reach over 8500 ft of elevation. This also happens to be about the altitude where I start to get dizzy.  This also happens to be the point in the race when the sun started to peak over the mountain creating a nice glare impairing my vision. There is nothing more terrifying than experiencing vertigo on the side of a mountain while trying to navigate loose rocks with bright sun in your eyes for about a mile.  The entire mountain starts spinning around me.  It happens every year.  In reality, there were only spurts of loose rock broken up by runnable patches at the corners of the switchbacks.  It was nowhere near as precarious as I remembered it to be.

After the rocks we get back to runnable trail, for those who CAN run without oxygen since we are at about 9500 ft. Sidney and I were doing well up until then. At this point the altitude really started to impact us.  I also think we started off a bit dehydrated since we sat for hours in hot springs the day before.  We decided to step aside, enjoy the view and let some people go past so we weren't holding anyone up.

In the last mile, the trail gets relentlessly steeper.  Just when you think it cant get any worse, you turn a corner and discover you have to run up about 34 concrete steps near the top.  There was a chick dressed like a hotdog standing at the top when we arrived... or at least that is how I remember it!

A few more switchbacks and suddenly we are at the finish where we are allowed to stop moving... unless you are a streak runner.   At that point, I had not yet run a continuous mile so after finding a spot for Sid to sit down and hold my pack, I took off and did 4 laps around the parking area so that I could make sure I logged 1 full mile before Jim finished.  I did not want to have run a mile later when my body crashed.

After the race, we received our Finishers T-shirts, which you only get if you make it up and then we hiked 2 miles to the Tram so we could ride that down.  It is the best way to get down the mountain. The views from the Tram are awe-inspiring.  It is longest continuous aerial tram in the world.  It takes about 15 minutes to get all the way down.

In the past, usually Sid and I start together and cover about 3 miles before I pull away. But in consideration of this day feeling important to me... marking 8 years of survivorship, I decided I just really needed to run up that mountain with Sidney by my side.  He did not ask me to run with him. He doesn't need my help.  He encouraged me to go on with out him but I reassured him that I just wanted to spend the morning enjoying the views with him near me. He was by my side during all my treatment and through all the trials we faced since.

Each year we do this, Sidney always says he is not looking forward to the Mountain... but once when military sent him to ABQ for work, he made an impromptu solo trip up the mountain on his own (mid-day, facing snakes and other scary wildlife... possibly a bear, which he thought was a pig, but I don't think pigs live on La Luz :) ).  I am very proud of him and I was glad he was there to spend the day with me.  So one more time: Gone, Gone, Gone
Posted by Shannon at 9:53 PM