Sid and I spent a long weekend in Asheville 3 years ago.  We wanted to go back and do some of the things we did the last time (run trails, eat good food, run this 10k) and some new stuff (like fly ourselves in, take Enzo to Bent Creek, etc.).   In 2010, the weather was bad so we ended up driving down instead of flying.  This time the weather was nice so Sidney rented the Mooney and we flew down from NJ.

It was so beautiful flying in over the mountains, but mountains and wind equal a ton of turbulence.  As we descended towards the airport, the winds made a sudden shift.  We were the first to be diverted to a different runway.  This added a few more minutes for me to try not to puke as we bounced around.  I honestly don't know how Sidney does what he does.  Not much seems to phase him, at least in the air. 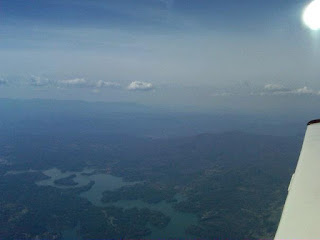 However, on the ground I can find ways to challenge his comfort zone ;).  On Saturday morning, as we walked into the school gym to pick up our packets, Sid exclaimed, "Hey! I didn't know there was a 5k option!"  I responded, "That's because I didn't tell you.  The 5k turns around before the big climb and I thought you would be disappointed to miss out on the challenge. ;)"

During my warm up, I ran right into Veronica (my old NYU roommate) and her baby nephew (who was truly a little genius at just over 1 years old).  V was coming to hang out with us for the day.  It was nice to see her after many years, but I was already getting pre-race nerves and was ready to start.   She asked me if I thought I was going to win.  I told her that would be unlikely since I don't train on hills and I fully expect some local runners to just crush the course while I suck wind on the climbs.

Sid met me at the starting line and commented how he was not looking forward to running up that mountain.  I told him that it is only fair that if he rattles me in the air, then I get to rattle him on the ground.  We both stood there knowing that we have done nothing specific to prepare for this course and accordingly there was now nothing we could do to make it not hurt.

The gun goes off. We start off downhill, turn a corner and head uphill until we finally start cruising down towards mile 1.  The 5k and 10ks start together.  It was hard to figure out who was racing what and with a crowded start I wasn't sure where I was in the field once we spread out and started making turns where I lost sight of the lead runners.

I wore my Garmin, but I did not look at my splits when I saved them.  I knew they didn't matter.  This race was about beating the course, not beating the clock.   M1: 7:02

I knew we would start really climbing before I hit mile 2.  I was torn between trying to run as fast as I could to the uphill, knowing that I would likely be power hiking at least the steepest part or trying to save myself  for the climb so I could stay strong on the way up.  As the 5k runners turned off, I was informed that I was the first female. That was unexpected but I assumed the local runners would just overtake me on the climb.  I wondered how long it would take. I saved a little strength for the climb. M2: 6:53

As we turned into the hill and started the climb, I could feel the pressure change inside my entire body.   I felt my heart beat in my ears.  The climb varied in steepness and I just tried to stay moving as my pace slowed to a crawl. M3: 9:01

Knowing that the we have to go down and remember that from 4-5 was a steep downhill mile, I just tried to focus on getting to mile 4.  Any chance now that I could run fast I took it. The climb was almost over so I didn't need to hold back.  I was surprised to not have been passed in mile 3 and could not help but take advantage of the twisting roads that allowed me to glance down to earlier parts of the course.  Even with a few peaks back, I noticed one female but couldn't tell if she was the closest one behind me.  If she was, there was no way to tell how fast she was going in relation to me.

Rather than worry about what is happening behind me, I decided to focused on the four guys I could see ahead of me and try to keep them in sight as I hit mile 4.  I was so tired and everything was burning but I was moving.  At the very steepest part, it seemed straight up, I was slowed to a power-walk for just a few steps. I realized walking would not slow my pace, but rather allow me to catch my breath a bit as I reached the summit.  I am glad I made this decision because once I crested the steepest part, I was ready to run hard and fast.  M4: 8:01

(Despite all those ups and downs in the Garmin data, in reality it was primarily up from 1.7 through 4 miles with flatter sections between ups.  There seemed to be only one noticeable downhill section during those uphill miles).

Once we hit mile 4, we got to go DOWN and make up all the time we lost.  The only trouble is that at points it gets so steep, that it makes me worry my feet are going to slip out from under me. I actually start gaining on the guys in front of me. M5 6:23.

I catch up to one guy who tells me that I am 1st female.  I tell him I have been waiting to be passed this entire race.  He asks me how old I am.  I tell him I am 37 and he said "I knew you were a youngster!" (LOL. Young!).  He says he is 47 and lives in the neighborhood.  I ask him what the rest of the course looks like.  He mentions one or two more little hills to go.  He asks me where I am from.  I tell him NJ and explain that I don't live in the mountains so I never expected to be doing this well.  I just keep pushing my pace and I pulled ahead of him, briefly.

We turned a corner and merge with the 5k runners. We hit a short uphill, where he flew past me.  We had caught up to some of the other guys and I pass one as I get passed back by the local guy I just met.   I stop paying attention to the men and just keep running hard.  I feel a little dizzy and it is becoming hard to focus M6: 6:22

We have a short downhill then and a final up hill sprint to the finish.  It is now that I begin to believe that I am actually going to win this race.  I can't believe it.  I can't wait to tell Sidney... if he is still speaking to me.

I see Veronica at the finish.  She is happy to see me finish.  She asks how I did.  I tell her I won.  She is surprised.  It can be hard to tell when the 5ks and the 10ks are coming in the same finish.  I head down to cheer on Sidney and a few minutes later I see him.  I ask him, "Do you hate me now?" He answers,  "Um, I am not speaking to you right now (with a smile)."  He ran well, but times and places don't matter to him.  Regardless, I am proud of him.