Decisions... Decision...
It was about last fall that I started to get excited about the USATF-NJ Long Distance Running (LDR) Grand Prix Race Series.  I wasn't focused on the series races at the start of last year.  I missed filling up my scorecard the way I could have had I actually paid better attention.  I made a strong push from September on and scored well managing to place 2nd in my Age Group in the statewide race series, just 4 point shy of first. I decided that  in 2013 I would try to pick races better and keep my head in the game. :)

The series can be a lot of fun if you let it.  If you want to do well you can spend too much time trying to research the race options to select races where you will get the most points.  Because I tend to place towards the front in either big or small races, it is to my advantage to show up to large races.   However, if I have a shot to win a small race, then that would be the best choice unless I don't win, then the big race is better... decisions, decisions.... :)

There were about 4 New Years day races to pick from.  Most were Cat I races, but there was one 5 mile Cat II race that I could have picked.  Last year I was scrambling for Cat II races so getting one done early was tempting.

Ultimately I opted to head to Westfield.  I knew I had a good shot at top 5 finish if I ran like I did at the Ashenfelter 8k where I ran 6:25 pace.  I have never broke 20 minutes in an actual 5k race, so I was interested in trying to run sub-20 pace again to make it official.

The Weather
The weather was perfect for a good race.  In the 30's, but a bit confusing.  There were ice patches everywhere, but the air temp felt comfortable.  If running into the wind, it felt cold.  Otherwise it felt wonderful.  I was sure I was over dressed in capris, a long sleeve tech shirt with a t-shirt over that, my Senna hat, gloves, and a neck warmer and T7 racing flats.  Most were in even more layers than me.  Only Nuno showed up half naked today, in just shorts and sneakers.  I wanted to give him my top layer shirt, but he looked happy and he runs fast so I knew he would be ok.

The Race
We start by running uphill and complete one full declining lap around the park.  We head back up that hill and halfway around the park we head out onto the streets.  We get routed back into the park and are rewarded with a downhill stretch to the finish.  Despite the two uphills (not a major hill, but steep enough to slow my pace), the downhill finish makes this course fast.

I line up towards the front.  In this series, score is by placement over the line.  There is no start mat and the field was about 800 runners.  Starting deeper was not helpful in this competition.  I was confident I could run the pace the people around me would be running so I stayed there.

Gun Goes Off and up the hill we go.  I pass the one woman that was lined up in front of me and found my rhythm.  I felt good, looked at my watch and saw I was sub-6.  LOL!  I don't believe the instantaneous pace is truly accurate, but I needed an accuse to reign myself in and that was enough.  M1 6:15

By mile one, people were calling out "First Woman!"  Since I started so far front, I didn't notice any ahead of me.  I wasn't confident I would stay in first place for the duration of the race, but I would try.  Back around the park and up the hill and could feel my chest burning.  My lungs hurt.  I had to make some whooping noises to clear them. People usually think I am really excited to be racing and often they whoop back!  LOL!!!  I knew mile 3 was going to be a gift, but I needed to catch my breath before I got there.  I was hoping that when I settled down with my pace, that I would not lose my position. I couldn't bear to look back to see if I was at risk.

People kept calling out "First Woman!" "First Woman!"and I felt like rock star.  But all I wanted to know was, "Where is Second?!" One benefit to running without head phones is you can listen to the race you are in.  I listened for the spectators to call out "Second Woman"... but I never hear it.  I pushed on because I didn't want to hear it just yet.  I never lead the Big local Races and 800 runners for a 5k is a big local race to me.  I hit mile two and refused to look at the split.  I knew I slowed but didn't want to see the damage. M2 6:37

Hard part of this race over, but I felt myself being over-taken as we entered the park.  It was only a matter of time before my lead got challenged.  I was so very happy to see that it was the guy who I had lined up next to at the start.  He shared some encouraging works and I tried to pick it up.

I was was heading back towards the finish, passing many still heading in the other direction. The positive cheers I got from the women, especially, was incredibly motivating. I listened for cheer for "Second Woman" and still heard nothing.  I dug in and ran hard, thinking if I get passed at this point and loose this win, I am going to make someone work for it.  M3 6:19

I can see the finish and it is so close. I am still heading down hill so I opened it up with everything I had.  I could see the 19 on the clock but it was going to be close.  The minute was almost over and I wanted that official sub-20 for the first time in my life.  Sub-20 after being a 23 minute XC 5k runner in high school many years ago.  Sub-20 after cancer and chemo and surgeries.  Sub-20 after a getting pummeled by and then managing this autoimmune malfunction. Sub-20 after having half my thyroid removed.  Sub-20 with mytral valve prolapse and exercise induced asthma.  After the 8k race I knew already ran sub-20, but it was not official and I wanted to see it for real so I could own it. Sub-20 and I will know the 8k wasn't a fluke.  But sub-20 just three days after running 50 miles in Texas.  That would make me feel good.  I really wanted this.  I dug deep.  I crossed the line and I heard again "First Female!"

A fellow runner, Joe, finished a bit ahead of me was at the finish.  He reached out for the hand shake, which I immediately turned into a hug because I was about to fall down. I couldn't suck in enough air to see straight.  I was having trouble getting my inhaler from my sports bra and the coughing was making me gag.  Oh crap!  I am about to throw up! No way!  I have never puked at the end of a 5k race!  But the gagging passed and I caught my breath enough for my vision to clear.

Second Woman?
After I got sweats on, the results were posted and I was listed 2nd Female.  What? Really?  Man, what a mood killer! It is possible that some chick may have been bundled in a hat or something and all those people along the way just missed her? But so many people told me I was "First Woman"... even at the finish line.  Or maybe someone had the wrong bib?  Couples accidentally swap bibs all the time?  Or maybe the runner was really a dude that got labeled a chick by mistake and it was just an error?  Once I ended up in the Male results, so this could be possible. I checked the name and it was "Jan".  Crap.  "Jan" sounds like a chick to me.  An older runner encouraged me to go confirm the result.

I found Fran and when I started to ask about the first place woman, she immediately reported. "Oh, don't worry.  We corrected that sex change we gave him by accident and he is happily back to being male." (or something like that).  She then gave me free reign to brag to all my friends that I was in fact the female winner! :)  Phew!  Runner's High back on in full force! 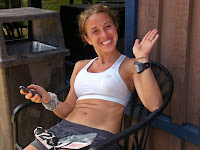 Happy New Years and Thanks for Reading!
Posted by Shannon at 7:42 PM