Every August 5, I reach another anniversary of my cancer diagnosis.  I began the journey towards survivorship with the discovery that something was wrong on May 13, 2005 (yes, that was a Friday).  To celebrate another year of survivorship, I sign up for my local ACS Relay for Life which is always in June each year.  This is my third year. 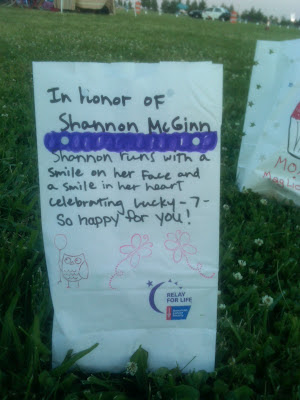 I often don't make a huge deal about this event.  I don't beg for funds.  I don't "organize" a team.  I realize the ACS would love to see big teams and lots of donations.  However, due to the underlying emotional nature of my quiet celebration, I am not interested in becoming the director/coordinator of a large number of people.  I would rather be present, attempt to stay up all night (which in itself is becoming more of challenge), share the night with others also touched by cancer, and pay my respects to those who are no longer with us.

So instead of making a huge project out of this event, I simply sign up as a team of one. I post some links asking anyone who would like to join me in some laps to please join my team, make at least the $10 donation, and then meet me at the event at their convenience. This works for me.  Many people wish they could make it, also donate.  I know some very generous people.  Thank you again for your contributions to the ACS on my behalf!

Each year about 5-7 people, some very close friends and some very new friends, show up at various points in the night to walk or jog with me around the park.  Each year I raise about $600, which I think is quite good since I usually don't know if I can commit to the Relay until about 2 weeks prior to the event.

This year was the first year I got to the park alone.  I set up my tent, my table, my chair.  There was a moment when I felt overwhelmed by a sense of loneliness in a sea of people playing games and having fun, so I called Tamra :).

One wonderful gesture that truly helped me feel less lonely occurred as I walked in the back of the pack of 17 survivors, and I passed the luminary dedicated to me by Jacqui.  To see my name and a lovely message helped me know that even when we walk along we are not.  Without fail, every time I go to this event I find myself getting overwhelmed by emotion that sneaks up on me.  As I completed the survivor lap, I was grateful to get the emotions out of my system, especially before my people arrived to join me various shifts.

At 8:30 pm,  Sidney was the first to arrive and wasn't staying long.  He had to be up by 5:30 am to head to the base and needed to go home to sleep.  He walked a few laps, saw Jacqui's luminary and was pleasantly surprised as he showed me what he found.

Just before 9:00 pm Ann arrived.  I "met" Ann on the Team in Training Alumni page and was very flattered that she would come to join me for my run.  It was wonderful to discuss her plans as new marathoner with an NYC marathon entry.   Sid left as Ann arrived.

By 9:30 Tamra arrived as I ran with Ann.  The thing about running at night, is that you can't help but automatically become fast friends.  All I can say about Tamra is that I can always count on her to be around for the extreme ridiculousness I come up with.  She is just an awesome friend and I am always grateful to see her.

By 10 pm Kerry arrived and we continued on the journey.  Walking, running, talking.  We sat for breaks after a few 0.8 mile loops.  Kerry is one of the funniest and smartest people I know.  Her wittiness always catches me off guard and some of the things she has said over the years end up filed away in my mind as some of the funniest things I have ever heard anyone say.  I was so happy to see her.

By 10:30 Lauri arrived.  I was looking forward to Lauri's arrival.  After a recent passing of her dear friend, I wanted Lauri to come Relay with me.  We didn't get to spend enough time talking about the amazing things Angela has done, but I know we both had her in our minds.  I was glad to have Lauri there to make me laugh with her hilarious sense of humor.

By 11:30 or so, Rich had made it.  I met Rich through the Wickatunk Track Club running group page, after my friend Jim Plant sent me a message that I should join the club.  I mentioned in passing that I was doing the Relay and he signed up to run some laps at night.

Jim Plant is a member of the Mangum Track Club in NC, and the Wickatunk club started by Rich is modeled and inspired the North Carolina organization.  As we discussed NC running and who Rich knew on the Mangum Track Club, Rich mentioned how he ran the last bit of his shirt run with Jim Plant.

Almost on cue, as if he knew we were talking about him, at 12:30 I get a text from Jim Plant who was running the Boogie marathon in NC and we got a brief race report.  Awesome timing Jim!

By 2:00 am Jess texted to report she was lost b/c the GPS park street address I found online actually sent people up the block about 1/4 of a mile.  By 3 am she had arrived just as Rich needed to get home.

With a little break in the tent at 4 am for rain, Jess and I walked a few laps through sunrise. At 5:30, she needed to get going to meet the TNT running at the GWB run.

By this point I had 29.9 miles and I decided that 50k would be a nice place to stop.  Tamra had taken a nap and woke up for my final laps.  As I hit 31.06, I stopped my watch noting that it took me over 6 hours longer to complete this 50k than my best 50k effort.  Tamra noted that out of all the crazy crap I come up with, this night was one of the most pleasant.  I agreed.

I moved my car closer and thought about how I tired I was.  I didn't have much to pack but I thought about how nice it would be if Sid was here to help me carry my gear to my car so I could make just one trip.  And there in the distance, I saw Sidney walking towards me. He decided to stop over before he left for work just to see if I needed any help.